Luki B. Subekti June 18, 2018
Currently, there are several models of Raspberry Pi i.e. A/B, A+/B+, 2, 3 and zero. The differences are on their provided interfaces, RAM size, processor model, processing power, AV jack, etc. Pi 3 uses Broadcom BCM2837 SoC with 64-bit support. Unlike earlier models, Pi 3 has built in wireless support, including 2.4GHz Wi-Fi and bluetooth. There is a Display Serial Interface (DSI) port near GPIO port. There is also Camera Serial Interface (CSI) near HDMI port which provides a high-speed connection to the Raspberry Pi Camera Module. The Pi 3 can draw up up to 1.2A so we need power adapter that can provide 2A of current.

Warning: When handling the Pi, always avoid touching GPIO pins, and never connect anything to them while Pi is switched on. GPIO port is powerful but fragile. 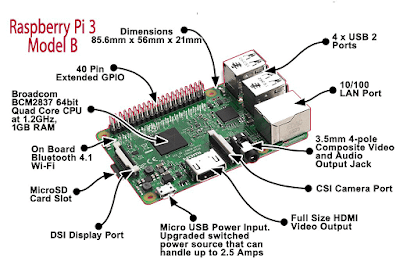 Raspberry Pi Fondation supplies a software tool known as NOOBS (New Out-Of Box Software) which helps user to install standard operating system for Raspberry Pi like Raspbian and others. We can download it from https://www.raspberrypi.org/downloads/. There are two types of installation methods.
Main storage of Raspberry is the SD card. We can expand the Pi storage capacity by external drive.
Raspbian is based on Debian. The default directories in Raspbian distribution are as follows.
There is a powerfull tool which is provided by Raspian to set some basic configuration of Raspberry Pi. This tool can be run by raspi-config command. We can configure hostname, enable SSH, change boot setting, and many others.

In networking, by default the Pi will query DHCP server on the network for dynamic configuration information. We can also change its configuration to static in /etc/dhcpcd.conf. We can set static configuration for all available interfaces such as eth0, wlan0, etc. After the changes are applied, we need to restart the networking service: $ service networking restart. For wireless networking, we can run this following command to scan available connection.
The status of the established wireless connection can be showed by iwconfig command. There are several modes of the wireless adapter i.e. managed (standard wireless network),  ad-hoc (device-to-device), monitor (the card listens for all traffics), repeater, and secondary (backup repeater). The Pi wireless network configuration is handled by wpasupplicant tool. Using this tool, we can connect our Pi to any wireless network, WPA, WPA2, or WEP, in any mode, AES or TKIP. This tool configuration is located in /etc/wpa_supplicant/wpa_supplicant.conf. All accessed network records are stored here. If the Pi is in WPA/WPA2 encrypted connection, we will see configuration likes the following.
If it uses unsecured connection without password, there will be only ssid and key_mgmt=NONE fields. If it uses WEP secured connection, the configuration should be key_mgmt=NONE and wep_key0="<your-WEP-key>". To enable the changes, we can restart the Pi or run this command: $ sudo ifup wlan0.

If you think this article is usefull, please share it with your colleagues.